A warm welcome back to those of you who are following this story, and thank you for staying with me.   We have looked at the general, simplified anatomy of the penis, and the main ways in which circumcision is performed.  Now I want to dispel a few myths, many of them perpetrated by the medical profession, and to enlighten you about the facts.

There are still staunch advocates for infant circumcision, but it is fact that there is no medical organisation anywhere which recommends this routine circumcision.  The Royal Australasian College of Physicians, The British Medical Association and the American Academy of Paediatrics are included in those organisations.  Routine neonatal circumcision has been declared unlawful in South Africa, Sweden (apart from on religious grounds) and Finland. 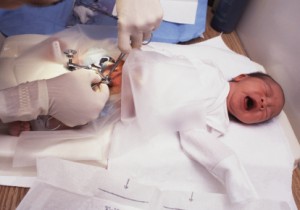 A myth still floating around is that doctors advocate routine circumcision of newborn baby boys.  The truth?
The RACP says, in their Policy Statement, in part:  After extensive review of the literature the RACP reaffirms that there is no medical indication for routine neonatal circumcision. The complication rate of neonatal circumcision is reported to be around 1% to 5% and includes local infection, bleeding and damage to the penis. Serious complications such as bleeding, septicaemia and meningitis may occasionally cause death.

The possibility that routine circumcision may contravene human rights has been raised because circumcision is performed on a minor and is without proven medical benefit.

Review of the literature in relation to risks and benefits shows there is no evidence of benefit outweighing harm for circumcision as a routine procedure in the neonate.


From Wikipedia:
The Royal Dutch Medical Association stated in 2010: "There is currently not a single doctors' organisation that recommends routine circumcision for medical reasons."  The Royal Dutch Medical Association issued a new policy in May 2010: "The official viewpoint of KNMG and other related medical/scientific organisations is that non-therapeutic circumcision of male minors is a violation of children’s rights to autonomy and physical integrity. Contrary to popular belief, circumcision can cause complications – bleeding, infection, urethral stricture and panic attacks are particularly common. KNMG is therefore urging a strong policy of deterrence. KNMG is calling upon doctors to actively and insistently inform parents who are considering the procedure of the absence of medical benefits and the danger of complications."

The Fetus and Newborn Committee of the Canadian Paediatric Society posted "Circumcision: Information for Parents" in November 2004, and "Neonatal circumcision revisited" in 1996. The 1996 position statement says that "circumcision of newborns should not be routinely performed", and the 2004 advice to parents says it "does not recommend circumcision for newborn boys. Many paediatricians no longer perform circumcisions."

The British Medical Association's position (June 2006) was that male circumcision for medical purposes should only be used where less invasive procedures are either unavailable or not as effective. The BMA specifically refrained from issuing a policy regarding “non-therapeutic circumcision,” stating that as a general rule, it “believes that parents should be entitled to make choices about how best to promote their children’s interests, and it is for society to decide what limits should be imposed on parental choices.”

The American Academy of Pediatrics (1999) found both potential benefits and risks in infant circumcision, however, there was insufficient data to recommend routine neonatal circumcision. In situations involving potential benefits and risks, and no immediate urgency, they state that "parents should determine what is in the best interest of the child". They continue, "To make an informed choice, parents of all male infants should be given accurate and unbiased information and be provided the opportunity to discuss this decision." They said, "In the pluralistic society of the United States in which parents are afforded wide authority for determining what constitutes appropriate child-rearing and child welfare, it is legitimate for the parents to take into account cultural, religious, and ethnic traditions, in addition to medical factors, when making this choice." If a decision to circumcise is made, the AAP recommend using analgesia to reduce pain, and also said that circumcision on newborns should be performed only if they are stable and healthy. 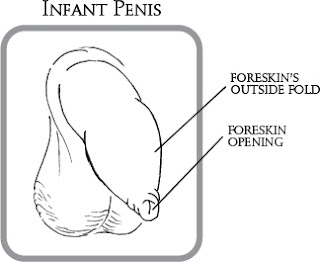 The American Medical Association (1999) noted that medical associations in the US, Australia, and Canada did not recommend routine circumcision of newborns. It supported the general principles of the 1999 Circumcision Policy Statement of the American Academy of Pediatrics.

The American Academy of Family Physicians (January 2007) acknowledges the controversy surrounding circumcision and recommends that physicians discuss the potential harms and benefits of circumcision with all parents or legal guardians considering circumcision for newborn boys. 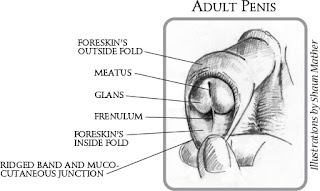 The American Urological Association (May 2007) states there are benefits and risks to circumcision, recommending that circumcision "should be presented as an option for health benefits" while acknowledging that "evidence associating neonatal circumcision with reduced incidence of sexually transmitted diseases is conflicting." It feels that parents should consider medical benefits and risks, and ethnic, cultural, etc. factors when making this decision.

So medical authorities are agreed that there are medical risks, and that routine circumcision of newborns should NOT be performed.  It is the old saying "if it ain't broke, don't fix it".   So much for the advocates.

Note that there is still no mention of the male having the right to make decisions about his own body?


A second myth is that it is less painful for circumcision to be carried out when the boy is a baby, rather than later in life.

Circumcision is extremely painful - and traumatic - for a baby. Just being strapped down is frightening for a baby. The often repeated statement that babies can't feel pain is not true. Babies are as sensitive to pain as anyone else. Most babies scream frantically when their foreskin is cut off. Some defecate. Some lapse into a coma. The reason some babies don't cry when they are circumcised, is that they can't cry because they are in a state of shock. Most babies are circumcised without anaesthesia. Anaesthetics injected into the penis don't always work. Being stuck with a needle in the penis is itself painful for a baby, just as if would be for anyone else. Babies are rarely given pain medication right after they are circumcised or during the week to ten days it takes for the wound to heal. Pain medication is not always effective and is never 100% effective. (Nocirc.org) 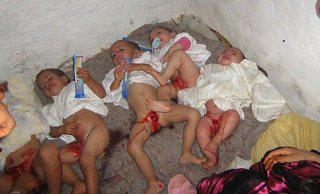 In 1997, doctors in Canada did a study to see what type of anaesthesia was most effective in relieving the pain of circumcision.  As with any study, they needed a control group that received no anaesthesia.  The doctors quickly realized that the babies who were not anaesthetized were in so much pain that it would be unethical to continue with the study.  Even the best commonly available method of pain relief studied, the dorsal penile nerve block, did not block all the babies' pain.  Some of the babies in the study were in such pain that they began choking and one even had a seizure  (Lander 1997). (Psychologytoday)

Tiny infants experience the most excruciating pain, both during circumcision and for weeks following the procedure.  They can exhibit changes in behaviour, for example avoiding physical contact, sleep disturbances, frequent crying and even reluctance to breast feed.
The last myth today (but not the last myth of all) is that of anaesthetics being used for newborns. 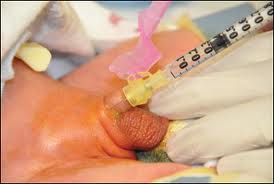 Oh, before I go any further, there is a doctor (who shall remain nameless) here in Australia who happily chops off foreskin from babies willy-nilly and has a huge website in favour of circumcision.  In my opinion he is a sadist, but he would probably dispute this. He also advocates the use of the EMLA patch.  There have been many very adverse results from the EMLA patch, and the reason is very very simple:

The following is from www.cirp.org:

This page presents information about risks associated with the use of EMLA cream for relief of infant circumcision pain. Although certain pediatric groups recommend its use, other authorities tell a different story.

EMLA has added a new warning to their product inserts and their web site. The new warning states:
"EMLA Cream is not recommended for use prior to circumcision in pediatric patients."

[Material in brackets added. CIRP]
Editor's note: Recently we received a copy of the following letter from Grace Boudreau, RN, Director of Quality Assurance, G. R. Baker Memorial Hospital, Quesnel, B.C. [British Columbia, Canada]. The letter was sent to all general practitioners, hospitals and pharmacies in Northern British Columbia on March 28, 1994. We have permission from the letter's author, Dr. Marie Hay, to print the letter in its entirety (bold type represents emphasis expressed in original letter.)


Dear Doctor,
The Department of Paediatrics at Prince George Regional Hospital recently discussed the unfortunate case of a 21-day-old male child who was circumcised using Prilocaine as a local anesthetic agent. A few hours after the circumcision the baby developed significant Methaemoglobinaemia [reaction with the blood] due to the Prilocaine anesthetic.
The department of Paediatrics is issuing a strong warning to all physicians who perform circumcisions. We strongly advise that Prilocaine local anesthetic not be used under any circumstances for neonatal circumcision. It is also interesting to note that EMLA cream contains 2.5% Prilocaine. It also therefore should not be used on the mucous membranes of newborns when they are circumcised.
It is the Department of Paediatrics' recommendation that no infant under the age of 3 months gets Prilocaine or EMLA cream in any form because of the serious risk of Methaemoglobinaemia.
I understand from speaking with an Intensivist at B.C. Children's Hospital that two other cases of Methaemoglobinaemia due to Prilocaine have also been noted in B.C. in the past recent months. As you know Methaemoglobinaemia can cause brain damage and death in small infants.

Even the dorsal penile nerve block leaves the underside of the penis able to feel pain. Babies go into shock, and although this appears that they are quiet,  it  is their  body's  reaction  to  profound  pain  and distress.  Nurses will tell the parents "he slept right through it" so as not to upset them. Who would want to hear that their baby was screaming throughout in agony? 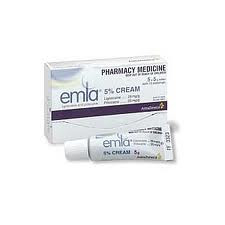 There are many risks involved with using anaesthetic on newborns, the above are just a small example of the outcome of using  EMLA (which by the way is NOT sterile) and prilocaine - which EMLA contains.

Where is that picture from the "a second myth" section of your article? What an awful picture, I need to know the story behind it, I want to know if they're okay..